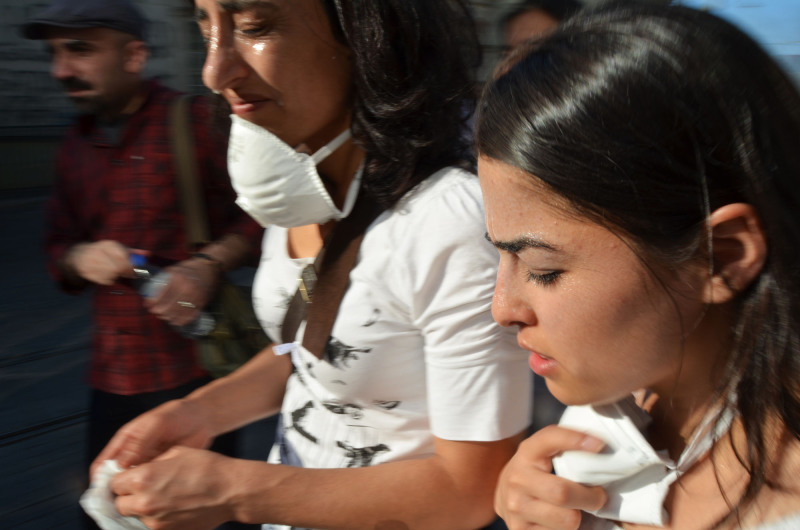 Previous Next
← previous day next day →

Posted by Carol (Istanbul, Turkey) on 13 June 2013 in Documentary & Street and Portfolio.

Posted on my fb page yesterday after the police attack

The spirit of the occupation is not broken. It is not dented. The Park tonight was a flurry of activity as food was prepared, tents moved, rubbish cleared and people returned bringing supplies requested on lists strung up at food stalls, supply depots and first aid posts. It felt strong, determined and together. While the Park had been shrouded in tear gas last night it was largely due to wind rather than direct targetting by the police. A few tents on the outskirts had been trampled but on the whole the police had kept their word; they had not attacked the Park.
What had happened yesterday evening was the clearance of Taksim Square. The violence was initially directed at a few youths and, plenty of evidence would suggest, agent provocateurs. I certainly saw a group of guys hanging around the water canon, dressed in civilian clothes and throwing stones at protesters who were watching the eviction on the other side of the street. In the Park the atmosphere was defiant and noise bombs (not sure what you call them) were met with sarcasm, “Oh. I’m so scared!” and other things I’m unable to translate. Gradually the atmosphere became more tense as the fighting continued and tear gas drifted in. At one point Çarşı, Beşiktaş football fans, kitted up with gas masks and got into attack formation with flag holders at the front. But when things did not escalate after a while, someone brought some stools out for them to rest. (I am a firm Beşiktaş supporter now.)
I left the Park around 7pm, walked down Istiklal and quickly realised that the crowds were thickening. (I later learnt Taksim Solidarity had put out a call for people to get to the Square.) Istiklal is a strolling street, for lovers and friends and families to enjoy the atmosphere of the famous Beyoğlu district. These people were not strolling. They were determinedly walking towards the Park, streams of them, not dressed for the sunny day it was but in good firm shoes and kitting themselves up with gas masks, goggles, water from street vendors on the way. Half way down I came across a march of around 300 from the Contemporary Lawyers’ Association, angry, loud, defiant in the wake of the arrest of around 30 lawyers the previous day. I went back up to the Square with this throng (it felt good). By the time we got there the fighting at the side of the Square had ended, the police had regrouped in front of the Cultural Center and all was peaceful and joyful as people felt strong again in their numbers. By the time I got home the picture had changed dramatically as the police attacked resulting in the distressing pictures you have probably all seen. The numbers were both not enough to stop the police attack, and big enough for the police to attack.
Tonight Erdogan has said the occupation will end in 24 hours. He also said the police will be using very different tactics. No one knows whether this is posturing or a serious threat; this is Turkey after all and anything can happen. There is another call for people to get to the Square. I hope the occupation is ready to defend itself. There is no outward evidence of such preparations. Nor have I seen evidence of any attempt to politically shape the occupation, to help it to understand the processes of which this movement is a part. Without this, it may be difficult to call a retreat were it felt necessary.

continue great work and take care of yourself !

You have provided an unforgettable link to the reality of this stand - it has been far more powerful than much of the 'news' coverage because it feels (and is) so personal. Take care, my friend.

don't worry about answering directly to us: you are already "answering" with your images and words, I can send you and to everybody there my love. Blessed you are for your dignity.

@maurizio jaya costantino: I should be pretty easy to find - theres only one carol williams in istanbul :) my email address is above

a very interesting documentary, more than T.V News because it's real with you ! Take care and good luck !

it is terrible what is happening there, but democracy need tears!!!

@Dimitrios: you must be feeling how true that is with your own experiences in Greece recently

You are doing a great job at reporting this.. well done. All the best to you and to the protesters.

This image has been featured in 1 Remix collection.